"I am very grateful for the hospitality!" 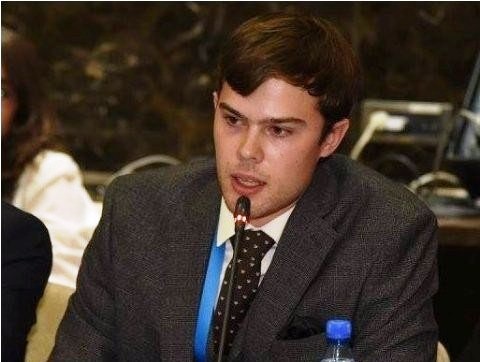 Reforming a higher education system is enormously difficult, invariably expensive and political. The rapid growth of the country’s economy and Azerbaijan’s historical cosmopolitanism give it the resources and the willingness to explore new approaches in education system.

Azerbaijan has achieved successful results in the field of education. As a part of this achievement, today, thousands of international students from various countries in the world are studying at universities of Azerbaijan.

One of them these students is Bryant Hepp, he is a fourth-year student studying International Relations at Michigan State University in the United States. Bryant has come to Azerbaijan in January within exchange program. Now he is going on to study in ADA Diplomatic Academy.

We wanted to know his impressions and expectations on Azerbaijan.

Bryant, have you got information about Azerbaijan before your arrival here?

Before I came to Azerbaijan, I knew very little about the country. I knew that it was a country within the Caucuses and between Turkey, Russia, and Iran, but I didn’t know much about the people or the culture. I was able to learn more through my university, which has an exchange program with ADA University in Baku. The program between our schools was very important in spreading awareness between our societies.

If we compare education systems between two countries, what can you say about advantage or disadvantage of studying here?

There are many things I love about the Azerbaijani education system: all the schools I’ve visited are well-equipped and have knowledgeable professors teaching classes. I am grateful that the class size is smaller here than in the US—some of the classes I took at my home university contained over 300 students. Because the school I attend here is smaller, the students are able to form a better relationship with the teacher, which is very important. The only thing I miss about the US is the size of the campus—I think more green areas to sit in, walk through, or enjoy after class would be nice.

Have you been to other regions of Azerbaijan?

I have not, although I would like to very much. Many people tell me about beautiful areas outside of Baku, like Lenkeran, Sheki, Ganja, and Guba. I hope to travel during the Novruz break and see how people celebrate across the country.

It is interesting your thoughts on Azerbaijani national cuisine. Do you like our meals, especially, which one?

I think Azerbaijani cuisine is delicious! It is hard to pick a single favorite meal, but I have enjoyed both dovga and plov nar bic. Tendir and saj are also very good, and I enjoy qutab as a light meal with tea.

What is your view about Azerbaijani youth, their characters?

I am very grateful for the hospitality of Azerbaijani youth! It is difficult to adjust to a new country, especially when I know only a few words of Azerbaijani. As soon as I arrived, many of my fellow students offered to show me around the city and help me run errands. Many young people have invited me to visit their families and try homemade food, and to celebrate the holidays with them. Even strangers have been very polite, and do their best to help foreign travelers even if they cannot understand the language.

I know that you attended the First National Model of UN, and even you represented the Republic of Armenia. I would like to know your impressions about this.

I had an amazing time at MilliMUN and am thankful for the opportunity to meet so many young people from Azerbaijan’s best schools. When I was contacted about representing Armenia at MilliMUN, I was not sure what to expect. Like most Americans, I had not heard anything about the Nagorno-Karabakh conflict until I planned to travel here last spring. It was a challenge to try to view things from an Armenian perspective, even when I did not agree with them personally (and I can only imagine how it felt for my Azerbaijani friends! In the end, the research I did for the conference helped me learn more about the conflict and the tragedies that occurred, and even though I did not agree with many of the positions I had to take, I hope that it was helpful for understanding the situation. I also hope that Azerbaijan is able to see peace returns to the entire country, and that there is justice for those affected by the conflict.

Would you like to be a diplomat of USA in Azerbaijan in future?

Absolutely! My dream job would be to work in the government in order to build relationships between our two countries. Public diplomacy is also crucial for promoting friendship and cooperation. In that sense, I hope that I am already acting as a diplomat from the people of the United States to the people of Azerbaijan (and vice versa when I return home.

At the end, your plans, future career…

After I graduate this spring, I plan to join the Peace Corps and volunteer in a foreign country for two years. After that, I hope to go to graduate school and receive a degree before working for the government or an NGO.