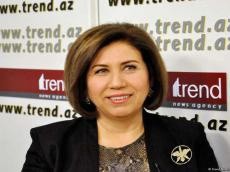 Germany plans to bring together delegations of Azerbaijan and Armenia to discuss the current state of the long lasting Nagorno-Karabakh conflict.

Bahar Muradova, deputy chair of the Azerbaijani Parliament and head of country’s delegation to the OSCE PA, announced about this in an interview to dailykarabakh.com.

In April, Germany plans to hold a seminar based on experience with regards to the returning of Saar Protectorate, a region that was partitioned from Germany after its defeat in the Second World War, Muradova said.

Azerbaijani and Armenian delegations were invited to take part in the event, Muradova said, adding that Azerbaijan has agreed to participate in this event, while the Armenian side is still considering the invitation.
“Participation at this seminar can help to hold a Minsk Conference during Germany’s chairmanship at the OSCE,” Muradova said. “If Armenia agrees, it will contribute to the Nagorno-Karabakh conflict settlement in the period of Germany’s chairmanship.”

She said if this event takes place, Armenia’s aggression towards Azerbaijan, the long lasting war and its victims will be mulled there.

For over two decades, Azerbaijan and Armenia have been locked in conflict which emerged over Armenia's territorial claims against its South Caucasus neighbor. Since a war in the early 1990s, Armenian armed forces have occupied 20 percent of Azerbaijan's territory, including Nagorno-Karabakh and seven surrounding regions.
Over the entire period of its existence, the OSCE Minsk Group, which acted as the only mediator in resolution of the conflict, failed to move forward in resolving the long lasting conflict, although the interested parties had pinned great hopes on it.

The group's activities were subjected to criticism many times and Baku has numerously stated dissatisfaction with the work for pushing the conflict from the dead point.

Bahar Muradova believes that Azerbaijan rightly criticizes the activities of the OSCE MG co-chairs, adding that this is due to the lack of result in the peace process.

“How can we talk about the activity if it is ineffective? The co-chairs of the Minsk Group do not use their capabilities and powers sufficiently. The Minsk Conference should be conducted at least once a year. The co-chairing countries took the settlement of the conflict under their monopoly. They do not want to discuss it in other international organizations,” she said.

Muradova believes that the activity of the co-chairing countries serves to preserve the status quo profitable for Armenia.

In 1994, the OSCE Budapest Summit established the so-called Minsk Group, which is co-chaired by France, the Russian Federation, and the United States. The group’s permanent members are Belarus, Germany, Italy, Sweden, Finland, and Turkey, as well as Armenia and Azerbaijan.