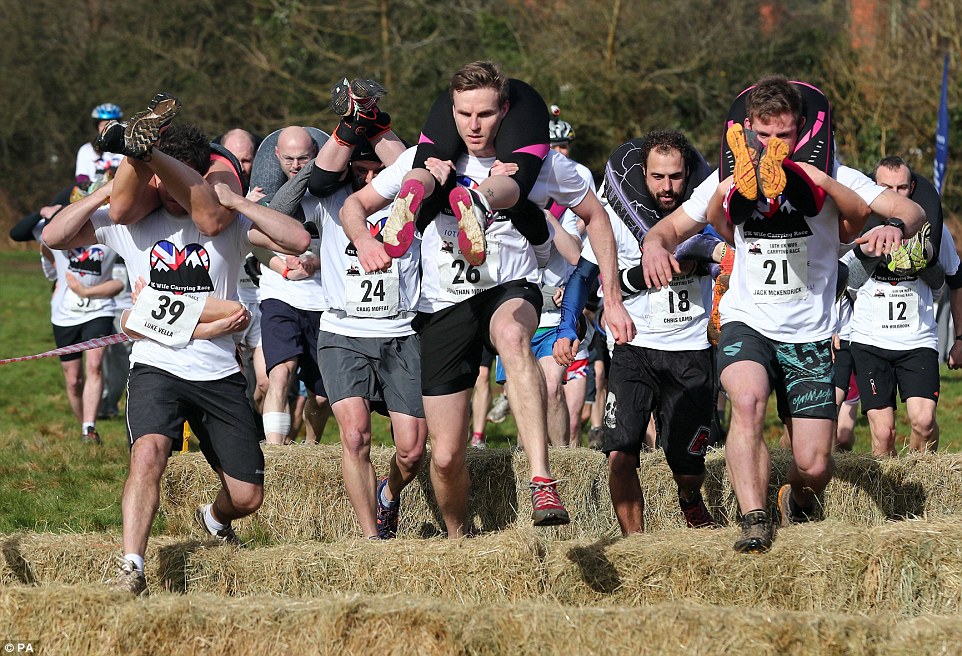 Huffing and puffing as they race over a hilly obstacle course, these couples truly put their relationships to the test at the 10th annual UK Wife Carrying Race yesterday.

In what may be the most un-PC sporting contest in Britain, 40 wives clung to their husband’s backs as they fought for glory over the 380 metre (1250 ft) route.

The race in Dorking, Surrey, is complete with hay bale hurdles, a punishing 15-metre climb and a ‘soak zone’, where spectators mercilessly chuck buckets of water over the battle-hardened competitors.

This year’s race was won by Jack McKendrick, 23, and his wife Kirsty Jones, from North Wales, who have now secured a place at the Wife Carrying World Championships in Finland in July.

And they may stand a good chance of winning in the global contest, as it will be a mere 253 metres in length - a third shorter than the British course - and much flatter.

The races are a Scandinavian tradition believed to be inspired by the Viking raiders who rampaged into northeast England 12 centuries ago, carrying away any (apparently) unwilling local woman.

In 2008 the practice was re-introduced to these shores when organiser Robert McCaffrey launched the inaugural UK Wife Carrying Race after being inspired by watching the World Championships on TV.

Competitors from all over the country took part in this year’s race, displaying a range of techniques including the piggy back and the fireman’s lift.

But the most popular – and speedy - lift was the ‘Estonian hold’, where the wife hangs upside down from her husband’s shoulders, with her legs crossed in front of his face.

Prior to the race, all wives were weighed and had to be at least seven and a half stone, with any under the limit forced to carry a handicap of a rucksack full of beans or sugar.

The competitors were rewarded with medals while the couple with the heaviest wife take home a pound of sausages.

Those last over the line are awarded a consolation prize of a pot noodle and can of dog food.

Both prizes were won by Kieran Hughes, 44, and his partner Tracey Alder, 46, who said after the race the pair’s tactics were to ‘plod on, slowly but surely’.

Mr Hughes said: ‘We tried the Estonian hold, early this morning when we were watching other people do it so we hadn’t really practised before.

‘We heard about it online, it’s the first time we’ve taken part. It was so tiring.’

Meanwhile, the victorious Mr McKendrick said: ‘My tactics were to go hard and don’t stop. We’re both very competitive.

‘It’s the first time we’ve done the race, it was so hard and we got really wet but we’ll be back again next year.’