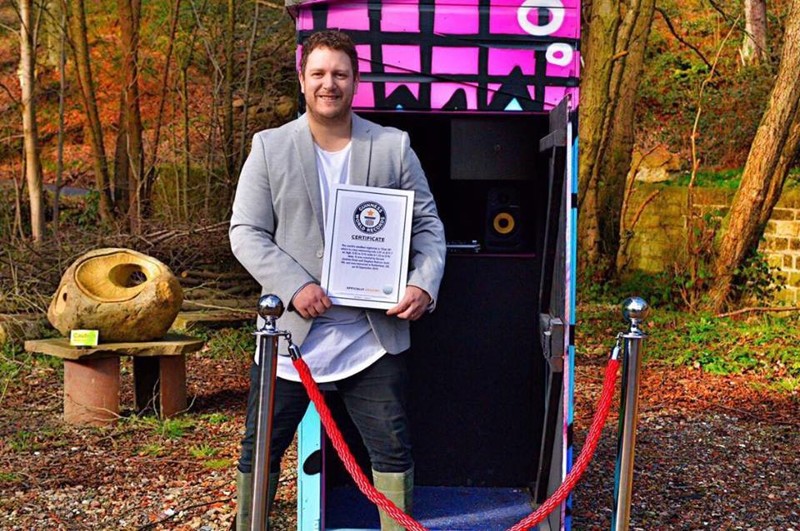 A unique new dance venue in the UK, consisting of a solid wood cabin that has capacity of six partygoers and one DJ, has set the Guinness World Record for the smallest mobile nightclub. Measuring just 2.01 metre high, 0.92 metre wide and 1.53 metre deep, "Club 28" is opened its doors at the Rotherham.

The venue contains a professional quality sound system with two turntables, a usable dance floor, dynamic lighting and has door staff outside. In order to achieve the record, the club had to be open to the general public and charge an admission fee which was 50 pence per person at the Rotherham Carnival.

Two DJs headlined at the minuscule venue during the carnival, entertaining guests with a mixture of house and chart music. Since the record attempt, the exterior of what the creators calls a 'revamped musical shed', has been redesigned by street artist Marcus Method.

"It's amazing to get a world record and definitely a tick off the bucket list," said Gerard Jenkins-Omar, Creative Director at Enter Media UK, who created the nightclub along with Stephen Robson. "It's a bit of fun and brings a smile to the faces of people who see it and dance in it," Jenkins-Omar said.

Previously the world's smallest nightclub was "Rumours", a box measuring 2.10 m high, 1.17 m wide and 1.78 m deep. It was was presented at the Liverpool Bold Street Festival in the UK on 26 September 2010.