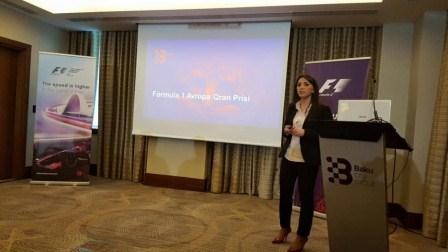 About 70 national journalists, including broadcast, online and print media, got a chance to learn about the upcoming media accreditation process for the inaugural Formula 1race to be held in Baku this summer.

The media accreditation process for the 2016 FORMULA 1 GRAND PRIX OF EUROPE will begin for Azerbaijan’s national media on March 1st via the BCC official website: www.bakucitycircuit.com. The deadline to apply for media access to the 2016 F1 Grand Prix of Europe is 17.00 (Baku time) on March 31st.

In the opening speech, Nigar Arpadarai, BCC’s Head of Marketing and Communications, and National Press Officer for the 2016 FORMULA 1 GRAND PRIX OF EUROPE, spoke about the latest preparations for the race, and urged national media to actively engage in the application process.

“We invite the national media to play a key role in covering the 8th round of the 2016 FIA Formula One World Championship which Baku will host on June 17th -19th. I would advise journalists to act fast and apply as early as possible so that they don’t miss out on this unique chance to be a part of the largest motorsport event ever held in Azerbaijan," she said.

During her speech, Ayan Aghayeva, Media and Broadcast Operations Manager at BCC, presented the details of the accreditation requirements to the media. Rahim Aliyev, official Ambassador of the 2016 FORMULA 1 GRAND PRIX OF EUROPE, and the nation’s prominent Formula 1 commentator also shared his thoughts with the attending media how to best cover an F1 race.

At the end of the workshop, BCC officials hosted a Q&A session in which they answered all of the questions asked by the attendees.

Baku City Circuit (formally Baku Grand Prix LLC) stands for the name of official promoter of the 2016 Formula 1 Grand Prix of Europe in Azerbaijan, as well as the title of the host venue of the race.

With a length measuring at slightly over six kilometres, the 20-corner track will be lapped 51 times, with cars reaching potential speeds of up to 340km per hour, marking the circuit out as the fastest street circuit on the existing F1 calendar.

The circuit offers a number of challenges for drivers, including an extremely narrow uphill section along the old town walls that will require pinpoint accuracy, and it has an acceleration section of almost 2.2 kilometres along the seaside promenade, which will see the cars running flat out at very high speed - something that will create an incredible show for race fans.

On the weekend of June 17-19, 2016, the specially constructed Baku City Circuit will see Formula 1 cars race around the picturesque streets of downtown Baku, incorporating the city’s UNESCO-protected old town – Icheri Sheher - as well as its modern skyline and beautiful Caspian Sea vista in front of a global audience of millions.