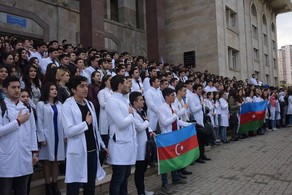 "Armenia has been conducting systematic, deliberate and targeted attacks on non-combatant civilian population encompassing women, children and elderly residing in the densely populated areas. The refugees, who left their homes as a result of the Armenian occupation should return to their native lands!", student of the university Narmina Alakbarova said.

She mentioned, on April 2, 2016 all the frontier positions of Azerbaijan were again subjected to heavy fire from the Armenian side, which used large-caliber weapons, mortars and grenade launchers. As a result of the bombardment of 32 settlements, 6 civilians, including 2 children below 16 years, were killed and 26 civilians seriously wounded. Without timely use of effective defense measures, the number of causalities among population would be significantly higher.

"More than 1 million of Azerbaijani people were banished from native places. Now, just compare 500 million Europe tackling a refugee crisis of 1 million refugees since 2015 and 9 million Azerbaijan having more than 1 million refugees for 2 decades. The negotiation process has been going on for over 20 years, There are 4 resolutions of United Nations (822, 853, 874, 884) on withdrawal of Armenian troops from occupied territories of the Azerbaijani Republic. Armenia openly disregards the UN Security Council resolutions and resort to provocations every time a possibility emerges to move forward with conflict resolution", she said.