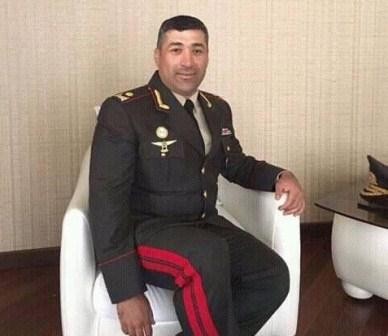 An officer of the National Army of Azerbaijan, Mais Barkhudarov has been awarded by President Ilham Aliyev because of his personally participation in the military operation of liberation of Lalatapa height from the enemy in Fizuli region from April 2-5.

The military expert Uzeir Jafarov wrote about this on his Facebook page.

According to the report, Mais Barkhudarov was awarded with the rank of Major-general by the Azerbaijani President.

He destroyed numerous Armenians’ forces however officer had limited forces.

According to the expert, Mais Barkhudarov is the first officer who was awarded with this rank by President for heroism during the last 20 years.


Notably, President of the Republic of Azerbaijan Ilham Aliyev on Tuesday signed orders on awarding honorary titles, orders and medals to a group of Azerbaijani military servicemen who have distinguished exceptional bravery and heroism while preventing the Armenian military provocations on the contact line of troops and repelling the enemy’s attacks on civilians from April 2 to 5.