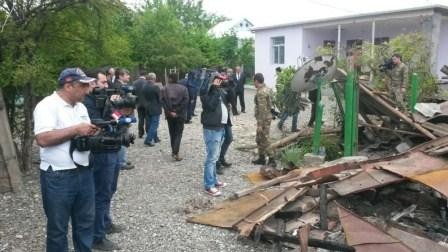 Local and foreign journalists, who visited the frontline, have arrived in Sarijali village, Aghdam. They viewed Sarijali local school which was damaged as a result of the Armenian shelling.

School principal Aybeniz Maharramova said the school was damaged after the Armenian armed units shelled it on April 2. She said none of the teachers and pupils was wounded as shells fell on the school in the afternoon on Saturday. The school is now being repaired.

The journalists then viewed a destroyed house in Mahrizli village.

Local resident Shahmalı Qahramanov said that around 100 shells fell in the village on the night of April 27-28.