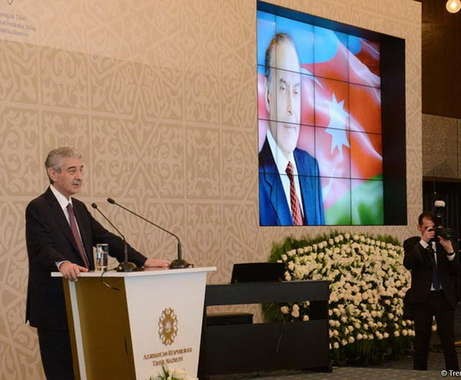 The government of Azerbaijan carries out big reforms in the education sector, and those working in the sphere bear an important responsibility.

Deputy Prime Minister Ali Ahmadov made the remark at the awarding ceremony of the "Best Presentation" contest dedicated to the 93rd anniversary of national leader Heydar Aliyev on May 5.

Ahmadov believes that educators will make every effort to ensure that students grow up as true citizens of the country.

Speaking at the ceremony, Education Minister Mikayil Jabbarov noted that in the next five years the number of students studying in the country's schools will increase by 30 percent.

This rising tendency requires the use of new approaches for sustainable activities in the field of education, according to the minister.

“Memorandums have been signed with several international and local organizations, while partnership with business organizations has been enhanced and employment of graduates has been supported. The Education Ministry has proposed reorganization of vocational education system, creation of a new structure for the preparation of elementary vocational and specialized education programs capable of ensuring an adequate supply of labor market.

Recently, the head of state signed a decree on the establishment of the State Agency for vocational training under the Ministry,” Jabbarov said.

The minister added that the new structure will improve the effectiveness of training in elementary vocational education and ensure training of competitive qualified personnel.

The competition among students of 9th -11th forms of secondary schools was organized by the Education Ministry, Heydar Aliyev Foundation, the ruling party "Yeni Azerbaijan" Communications and High Technologies Ministry and the National Committee of Free Trade Unions of Education Workers.