Ilham Aliyev at the event of 70th anniversary of Sumgait - Photo 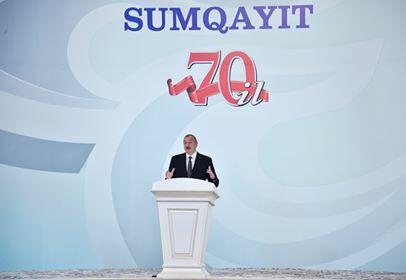 On November 21, President of Azerbaijan Ilham Aliyev paid a visit to Sumgait.

The head of state visited the monument to national leader Heydar Aliyev in the center of the city and laid a wreath in front of it.

The head of the city executive power Zakir Farajov informed about the work done in Sumgait.

President of Azerbaijan Ilham Aliyev attended an event dedicated to the 70th anniversary of the city at the Sumgait State Drama Theater.

The Head of State made a speech at the event.