Exhibition and concert held in Baku 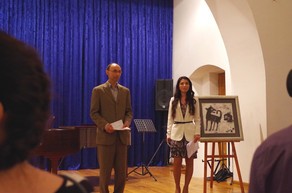 Concert in the framework of the event "I can't speak for myself. YOU are my voice. Street Animals in Baku" was performed in Kapellhaus on May 20.

The trio of violinst Alexandra Vydria, singer Narmin Karimbayova and pianist Ilgar Aliyev electrified the audience with their performance of famous Pop and Jazz interpretations.

The concert followed the exhibition "I can't speak for myself. YOU are my voice. Street Animals in Baku" opened in Kapellhaus the day earlier, on May 19.

The exhibition was opened by Toralf Pilz, Head of Political, Economic & Information Section of the EU Delegation to Azerbaijan, his wife Ulrike Pilz, who has contributed significantly to the organization of the event series and by Khayal Sadig, an activist of the organization Baku Street Dog Rescue, BSDR.

Focus of the exhibition is the presentation of the situation of street animals in Baku but also the encounters between humans and these "lost" animals.

BSDR has set up a donation box. With donations made last year, BSDR could help already 160 dogs to find a new home.