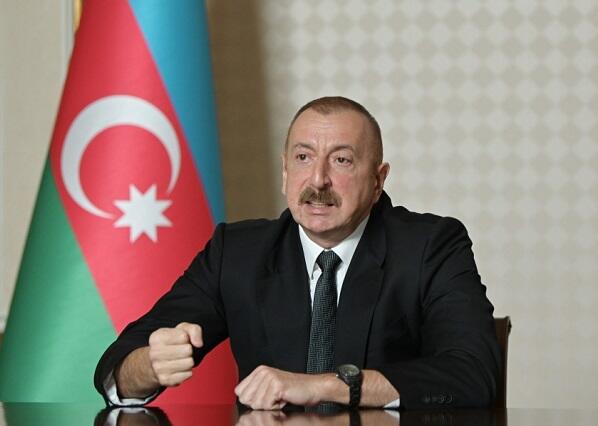 The successful operation by the Azerbaijani Army, the results achieved, as well as the military victory, of course, created enthusiasm in the Azerbaijani army, said President Ilham Aliyev.

Axar.az reports that, the head of state made the remarks Wednesday during a meeting of the Cabinet of Ministers dedicated to the results of socio-economic development in the first quarter of 2020 and future objectives.

The president said that the letters he received express full support for the activities the state is carrying out.

“Yesterday, a group of patriotic people marched towards the Alley of Martyrs in Baku to demonstrate their attitude to these activities, as well as to express their support for the Azerbaijani Army and me the Supreme Commander-in-Chief. I welcome this positive step. I’ve told that these people marched long distances by chanting slogans about me, as well as about our army, our people and Karabakh,” said President Aliyev, describing all this as another indicator of the people-government unity.

The head of state also touched upon the illegal actions taken by some provocative groups during yesterday’s march.

“Unfortunately, after the people came to the Alley of Martyrs, it seems that some provocative groups that had heard about this event somewhere also arrived at the site. Now, these groups are being identified. These provocative groups resorted to hooliganism, resisted the police and attempted to disrupt the public order. I personally instructed the interior bodies to ensure the people’s safety move to the Alley of Martyrs and regulate the traffic. I gave all these instructions to the Minister of Internal Affairs Vilayat Eyvazov last night. At the same time, I warned them to be on the alert, because it is not an exception that some provocative forces, representatives of the "fifth column" and traitors can take advantage of this situation to commit a provocation. Because sometimes unpleasant situations may occur at unorganized mass events. Therefore, the police officers performed their duty with dignity all the way up to the Alley of Martyrs. Police have also fully maintained the public order when people gather in the Alley of Martyrs," he added.

"However, I want to reiterate that a group of provocateurs tried to overshadow this beautiful and noble step and commit illegal acts. Of course, the police stopped their actions in a short time. Their identities are already being determined. All of them will be held accountable, and no one, as I said this morning, will be able to escape responsibility. Of course, they will be punished only in accordance with the law, if they will be punished by the court. We also ask for help from the public to identify them. I also ask the people who gathered there yesterday to identify those provocateurs. If they know those who want to commit provocation, let them inform us in order to find and punish them all," he said.