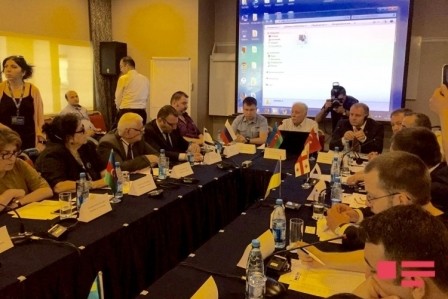 A conference was held in Baku June 2 in connection with the establishment of the coalition.

Addressing the conference, Telman Zeynalov, chairman of Azerbaijan’s National Center for Ecological Prognosis, said that the Metsamor nuclear power plant, commissioned in 1976 and the operational life of which has expired, poses a big threat to the region.

He said that relevant international organizations have stated that the operation term of the plant expired in 2006, but the Armenian side has been extending this period for ten years.

The NPP is a source of pollution for a large area and poisons the groundwater, Zeynalov said stressing the need to achieve the immediate closure of this plant.

In his speech, Rauf Sardarli, professor of Azerbaijan Institute of Radiation Problems, recalled that in 2003 the NPP was transferred to the management of a Russian company for five years.

According to him, at the moment, this nuclear power plant produces about 40 percent of Armenia’s electricity.

He went on to say that many units in the plant are out of use and the amount of radioactive waste is large.

“It should be noted that the NPP is located on the territory bordering with Azerbaijan, Turkey and Georgia. Only in Armenia about two million people live near the plant,” the professor said.

Sardarli added that the European Commission’s report for 2012 states the impossibility of restoring the plan. However, Armenia still ignores the statements of a number of international organizations.

“It is impossible to predict which step they will take. Today, everyone knows that fascist forces are in the power in Armenia and the use of a “dirty” bomb wouldn’t be a problem for them. What one can expect from a regime that committed genocide in Khojaly?! Therefore, I urge everybody and all the neighboring countries to solve this problem. We should unite our efforts, member countries should hold such conferences in their own countries,” he emphasized.

The head of the “Intra-national Liberation Movement” in Armenia, Vahan Martirosyan, who joined the conference via a video call, stated that the NPP is a source of threat for Armenia and the world.

He noted that the Armenians are also concerned about this issue, but they are afraid of expressing it.

“The Armenian authorities don’t care about the future of the Armenian people. Armenia doesn’t pay attention to violations in order to get huge profits with Russia. Despite the warning of the leading nuclear experts, the Armenian government has already started the construction of the 3rd electrical installation that increases the risks. So I consider that not only NGOs, but also international organizations should join this coalition,” he stressed.

Addressing the conference, the Russian and Turkish representatives also underlined that the NPP has already become a threat and it should be immediately shut down.