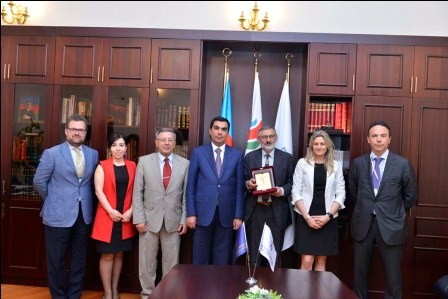 BHOS rector Elmar Gasimov informed the guests about current and future activity directions of the higher school as well as BHOS new campus and international relations. Mentioning the high level of relations currently existing between Azerbaijan and Italy BHOS rector said that the higher school was interested in cooperation with Italian universities and companies. While emphasizing the English as instruction language of BHOS academic system based on international programmes Elmar Gasimov also added the availability of close connection between BHOS education process and production via advanced technologies. He also underlined the high potential of cooperation between BHOS and Kinetics Technology S.p.A expressing BHOS readiness to take necessary steps in this direction. The guests gave detailed information about the company they represented. Informing about specialization of Kinetics Technology S.p.A in carbohydrogens, processing engineering, synthetic gases, production and the use of hydrogen, Gaetano Iaquaniello said that the company supported development of Italian higher educational institutions and realization of projects oriented to scientific research. Stressing company's operation in 36 countries of the globe and its operation in Azerbaijan within SOCAR Polymer project, company's vice president suggested that cooperation with BHOS could be realized in the field of scientific research, students' exchange, lifelong learning programmes and also in frames of EU science and education programmes.

Gaetano Iaquaniello also said that he was ready to render any kind of support to commence bilateral cooperation covering such spheres as establishing relations between BHOS and Italian universities, organization of lectures to be conducted by the specialists of the company, organization of internship for BHOS students to be taken in company's branches in Rome and Milan including preparation of scientific papers there.