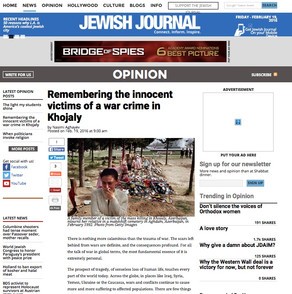 The Jewish Journal published on Feb. 19, 2016 an article by Azerbaijan’s Consul General in Los Angeles Nasimi Aghayev concerning the Khojaly massacre, which was committed in Feb.

1992 by Armenia’s armed forces against Azerbaijani civilians resulting in the killing of 613 persons, including around 300 children, women and elderly.

Published in Los Angeles, the Jewish Journal is one of the largest and most influential Jewish newspapers in the United States.

The Consulate General of Azerbaijan in Los Angeles, Consul General writes: “The town of Khojaly in Azerbaijan's Karabakh region might sound unfamiliar to some. But Khojaly was the scene of one of the most horrific tragedies in modern European history.”

“The Khojaly massacre was an unabashed campaign of ethnic cleansing, in no uncertain terms,” Aghayev notes.

Stressing that “this policy of ethnic cleansing and terror was even braggingly acknowledged by the very men in charge of it,” the Consul General mentions specifically the current president of Armenia Serzh Sargsyan and defense minister Seyran Ohanian, who were in charge of Armenian troops committing this horrendous crime in Khojaly.

“Since 1992, Azerbaijan has worked hard… to make sure the perpetrators of these crimes, the mass murder of innocent people, were condemned. And the world has responded: countries from Mexico to Slovenia and from Bosnia­Herzegovina to Peru, as well as nineteen U.S. states, including Arizona, Arkansas, Georgia, Nebraska, New Mexico, Texas, Utah and others ­ have all condemned the Khojaly massacre,” Aghayev further writes. Noting that the illegal occupation of Azerbaijan’s lands “has not brought any benefits to Armenia - on the contrary, it has only weakened the country and significantly reduced its sovereignty and independence making it over-reliant on external help,” the author highlights the tremendous transformation Azerbaijan has undergone since restoring its independence: “In a powerful contrast, Azerbaijan has become the region’s largest economy, pursuing and succeeding with a truly independent foreign policy and promoting interfaith tolerance and harmony in a difficult neighborhood."