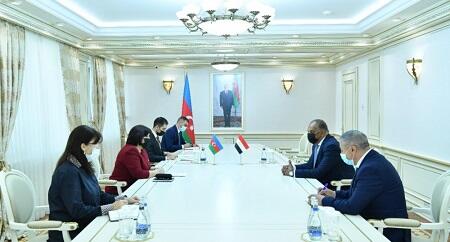 On April 7, Speaker of the Milli Majlis Sahiba Gafarova met with Ambassador Extraordinary and Plenipotentiary of the Arab Republic of Egypt to Azerbaijan Adel Ibrahim Ahmed Ibrahim.

Axar.az reports that welcoming the guest, the speaker stressed that Egypt was one of the first countries to recognize the independence of Azerbaijan. He noted that our country attaches great importance to the further development of bilateral relations with Egypt, noting that the documents signed between the parties make a positive contribution to further deepening cooperation.

Emphasizing the importance of cooperation between the legislative bodies of the two countries, Sahiba Gafarova said that a working group on Azerbaijani-Egyptian interparliamentary relations operates in the Milli Majlis.

The meeting also focused on Azerbaijan's great victory in the Great Patriotic War. It was noted that as a result of this victory, Azerbaijan liberated our lands occupied by Armenia and restored its territorial integrity and justice. Noting that a new stage has begun for our country, Sahiba Gafarova stressed that one of the main goals is to reconstruct our liberated territories at the highest level, to restore our cities and regions.

Expressing gratitude for the warm reception, Ambassador Extraordinary and Plenipotentiary of the Arab Republic of Egypt to Azerbaijan Adel Ibrahim Ahmed Ibrahim expressed satisfaction with his work in our country. He stressed that Azerbaijan has made great achievements and developed in all areas, noting that relations between the two countries have deepened with the support of the leadership of both countries.

The ambassador expressed satisfaction with the level of relations between the parliaments of the two countries.