Italian senator urges Armenia to provide mine maps to Azerbaijan 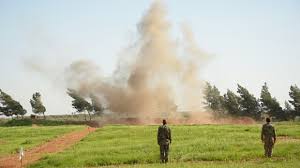 Italia’s senator urged Armenia to ensure peace and security in the region.

Axar.az reports that in a Facebook post, Mauro Maria Marino, Senator from the Italia Viva party, pointed out that the international community supports Azerbaijan in the issue of the maps of minefields in the country’s liberated territories.

The Italian senator called on Armenia to provide the maps of landmines it had planted in the previously occupied territories of Azerbaijan.

“After the liberation of Karabakh from occupation, the main goal must be ensuring the return of Azerbaijani IDPs to their homes. However, it seems impossible as long as there are mined and destroyed areas left behind by Armenians. Thus, Armenia must hand over minefield maps to Azerbaijan under international law and abide by the agreement [reached on 10 November 2020 by Azerbaijan, Russia and Armenia on the cessation of hostilities in Karabakh],” he added.