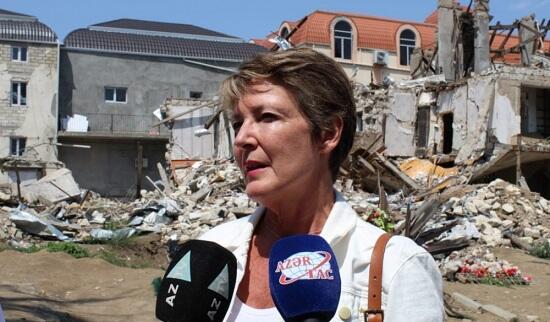 The purpose of our visit to Azerbaijan is to visit the war-affected and liberated territories. We started our mission from Ganja. We see that despite the fact that there is no military facility in the center of the city, a bomb was dropped here. We looked at these ruins. Dozens of civilians were reported killed.

Axar.az reports that the statement came from Frederic Dumas, a member of the French National Assembly delegation, who got acquainted with the war crimes committed by Armenia in Ganja.

"We would like the French to receive objective information about these events. That is why we, the members of the Friendship Group, came to the scene to tell the French public what we saw. Because many in France are unaware of this event. The conflict is over. Now we need peace in the region, and we hope so.

I would like to note that the French public is of the opinion that Armenians have not committed any war crimes against Azerbaijanis. We see with our own eyes that there have been attacks on civilians. This can be considered a war crime," said Frederic Dumas.