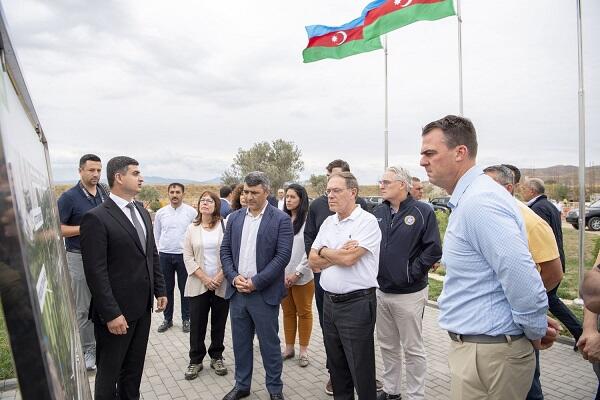 A delegation led by Oklahoma Governor John Kevin Stitt visited the liberated Zangilan region. During the visit, organized by the Ministry of Agriculture, the guests got acquainted with the work done within the "Smart Village" project.

Axar.az reports that the Ministry of Agriculture told that a presentation on the "Smart Village" project was held for the US delegation visiting the construction site in Birinci Agali village of the region. It was noted that the "Smart Village" pilot project covers the 1st, 2nd and 3rd Agali villages of Zangilan. The project is implemented mainly on 5 components. These components include housing, manufacturing, social services, "smart agriculture" and alternative energy. Initially, it is planned to build 200 individual houses in the area using fully insulated and innovative construction materials. In-house engineering communication and heating systems in the "smart village" will also be built on the basis of smart technologies. Modern schools, kindergartens, polyclinics and e-government centers will be built in these villages, and tourism infrastructure will be formed. All residential houses, social facilities, administrative and public catering buildings, the process of processing and production of agricultural products will be provided with alternative energy sources.

It should be noted that a delegation from Oklahoma is visiting our country at the invitation of the Ministry of Agriculture. The delegation, led by Governor John Kevin Stitt, includes Maj. Gen. Michael Thompson of the U.S. National Guard, Brigadier General John Harrison and other officials. During the visit, the delegation held numerous meetings in Baku and visited Hajigabul, Gobustan and Zangilan districts. The delegation is scheduled to visit Ganja tomorrow.