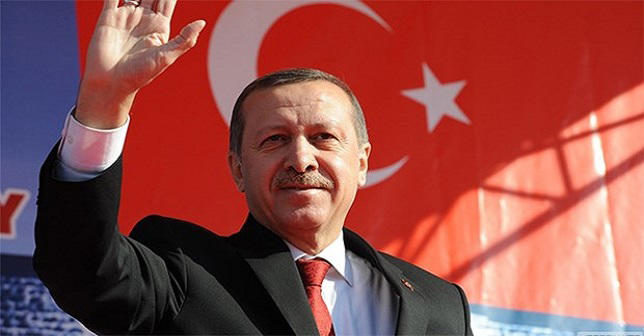 Over the past 15 years, Turkey has become a favourite of the Turkic world, a reference for all Turks, a place of trust for the Turkic states. Now there is a POWER to unite around the Turks;

Turkey has renounced the unconditional implementation of the instructions and decisions of NATO, the United States and the West, and has become a state that does not make concessions even to its allies in the national interest;

Turkey has become a regional power more than 10 years ago, and now aims to become a world power;

Turkey has achieved unprecedented success in the national defence industry and the world is already turning to Ankara to obtain the most advanced weapons of war.

The strengthening of Turkey leads to the beginning of serious processes in the Islamic and Turkic world; Turkey is no longer a weak state that was expelled from its borders and involved in the fight against PKK terrorists. Turkey is becoming a great power - at least in the region - defending the rights of Turkish and Islamic identities;

For the first time since the Ottoman Empire, Turkey has become a state that expanded its borders - its sea borders - by a concrete agreement;

Turkey has reached a level where it can influence large geography, from Syria and Iraq, Libya to Afghanistan;

Turkey is a rapidly expanding world power, and all of these have happened thanks to Erdogan.

Of course, for becoming a global power, the country's economic base must be strong - one of the conditions for being an international power is the economy!

But if you expand your political circle to become an international power, if you go thousands of kilometres beyond its borders, if you go into justice war from Libya to Afghanistan, if your moral and political borders increase many times over, then economic difficulties are inevitable. However, as these political boundaries are strengthened, economic power is not being restored, but on the contrary, it is reaching the country's political borders.

No one will allow you to expand your economic borders to this level - only China has managed to do so, because it has a population of 1.4 billion. No country in the world has formed its economic borders before its political borders!

First, the political boundaries are formed, then the economic ones!

A giant country like China has managed to do the latter, but its economic borders are not and will not be allowed to extend their political borders!

You must spend your political and military resources so that, for example, all the construction work in Karabakh is given to you with great confidence!

You have to use your economic power to make Afghanistan be close to you, which is thousands of kilometres away!

And these expenses, of course, make certain internal difficulties inevitable!

What has the United States lost in this direction for decades? How much have they lost in Iraq and Afghanistan? Trillions, right?

With the recent devaluation of the lira, panic has begun in Turkey. Civil societies and members of FETO, which are in the hands of certain Western powers, have become more active, and all options have been put forward to lower the AKP's rating. Yesterday, they finally took to the streets in Ankara and Istanbul demanding "resignation"...

All of these are the result of panic, propaganda, pro-Western organizations and, of course, the activities of the opposition!

There is no time to wait for the 2023 elections; because on that eve, the United States will also focus on the elections; because until then, it is under question if old Biden would be safe and sound, in fact, Mr Biden's health situation has become more changeable recently; and finally, it is doubtful whether Macron will continue his political life until then...

Therefore, the process of "advancing time" has begun.

Turkey, which kept two F-16s in Ganja for moral support in the Second Karabakh War, has reached a level where it can say "Do not interfere or I will also interfere" and stood in against all world powers, including NATO, from the level where it was not able to give two civilian helicopters to Azerbaijan without NATO's permission in the 1990s!

Turkey has found the POWER to carry its historical mission on its shoulders, fulfilling its hopes, fulfilling its dreams and becoming a reference for about 300 million Turks and 1.7 billion Muslims.

What about the weight of the load?

Wouldn't the world be worried about the unification of dozens of countries under the influence of Turkey, which is the Awakening, the Rising and the Power?

Wouldn't there be attacks against it?

Military-political and economic pressure has been exerted on Erdogan's completely independent policy for years.

But Erdogan endures, withstands all pressures, tries to raise Turkey to its dreams and the position desired by all Turks!

Turkey has never been so powerful after Ataturk! And this is seriously disturbing the visible and invisible forces, and the attacks are increasing rapidly. Blows continue to hit the country`s economy, which is Turkey's most vulnerable side.

Due to the pandemic, the weakening of tourism, the unknown sanctions, the Turkish economy is fluctuating, the lira is devaluating and the population is becoming more dissatisfied.

Will Turkey tolerate this? You expect to become militarily and politically stronger, you challenge the world powers, you come under sanctions, and you think your economic prosperity improve day by day?

Such things do not happen! If you carry the weight of the Turkish and Islamic worlds on your shoulders, if you increase their borders ten times beyond their physical borders, you will be sanctioned and you will endure: you will endure until you make the world accept you, Turkey, and the Turkish Union; Even if the dollar rises to 50 liras, you will endure, believe and be steady!

Without Erdogan, FETO would feed Turkey to the West;

Without Erdogan, the occupation of Karabakh would continue;

Without Erdogan, a "reserve state" would be established in southern Turkey;

Without Erdogan, hydrocarbon exploration in the Mediterranean would be just a dream;

Without Erdogan, Turkey would have long struggled to survive within its borders, trying to preserve its existence and integrity. Perhaps the decentralization of certain regions would have reached the level of fragmentation.

For the first time, Erdogan formed the image of Greater Turkey not on the moral borders of the Ottoman Empire, but on the borders of the Muslim-Turkish world.

If Turkey survives after economic shocks and stands by Erdogan, growth will be complete;

If Turkey does not panic about the "lira game, Erdogan will win the political war in the world ...

There is little time left. If Turkey reaches its 2023 target in a short time, in 2035 Turkey will be insured against all these pressures.

We always say: if you buy land, if you restore the territory, you will have to endure economic difficulties - this applies to Azerbaijan as well. Do you think it is easy for us? Absolutely not! The rise in prices breaks our backs, the difficulty is reminiscent of the 90s.

But no one can manipulate this difficulty! We will endure, build, return to Karabakh, reach our 2025 goal!

Turkey has also expanded its political borders by tens of thousands of kilometers.

If he endures, he will never see civil wars, terror, and power crises again.

Today, to strengthen the Turkish lira a little, those who took to the streets tomorrow will have to restart the war 30 years ago with those who want to build a NATO slave Turkey.

But will there be another Erdogan then? Or will it be held captive by governments that change every six months, or by coups d'état in NATO corridors every 20 years?