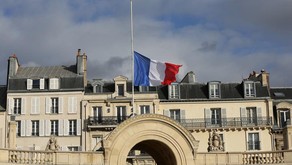 France has declared three days of mourning in regard with terrorist attack in Nice.

He said that mourning days will be from July 16 to 18.

Notably, in the evening on July 14, the truck driver rammed a crowd of people who gathered on the Promenade des Anglais in Nice to see the fireworks on the occasion of Bastille Day. According to eyewitnesses, the truck did not stop, zigzagging, was hitting people for nearly two kilometers of waterfront, the attacker also opened fire. He was eliminated by the police.