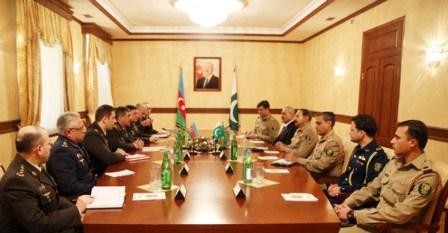 "Intensification of mutual visits plays an important role in strengthening of Azerbaijan-Pakistan relations", said Chairman of the Joint Chiefs of Staff Committee of Pakistan, general Rashad Mahmood, at a meeting with Azerbaijani Defense Minister, Colonel-General Zakir Hasanov, during an official visit to Azerbaijan.

According to the press service of Defense Ministry, at first, the delegation led by Rashad Mahmood visited the Alley of Honors to lay a wreath at the tomb of national leader, founder and architect of modern Azerbaijani state Heydar Aliyev.

They then visited the Alley of Martyrs to commemorate Azerbaijani heroes who gave their lives for the country's independence and territorial integrity.

Then Ministry of Defense held an official welcoming ceremony. The guest passed along the guard of honor and national anthems of both countries were played. "Book of Honor" was signed in accordance with the protocol.

Azerbaijani Defense Minister and Chairman of the Joint Chiefs of Staff Committee of Pakistan held in private and then expanded meetings. Addressing the meeting, Hasanov expressed his satisfaction with traditionally friendly and fraternal relations, strategic partnership between the two countries. Highlighting military-political situation in the region, Zakir Hasanov informed the guests about the Armenia-Azerbaijan, Nagorno-Karabakh conflict. He also emphasized Pakistan's support of the position of Azerbaijan in international organizations.

Azerbaijani defense minister stressed the importance of developing cooperation in the fields of security, defense, military, military-technical and military education, as well as expansion of relations and organization visits of expert groups.

In turn, Rashad Mahmood, hailed importance of such visits and expansion of bilateral relations.

At the meeting, the sides exchanged views on the issues on combat readiness joint trainings, cooperation in the fight against terrorism, also development of relation between Air and Naval Forces of Azerbaijan and Pakistan.