Azerbaijani gymnastics on the right path 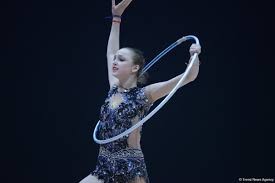 The level of development of gymnastics in Azerbaijan is getting higher from year to year, the sports officials of European gymnastics federations told Vestnik Kavkaza on the sidelines of the today's republic championships in acrobatics and trampoline.

President of the Technical Committee of the European Union of Gymnastics, Yakov Vishnev, praised the swiftness of developing of the Azerbaijani gymnastics. "Sport institutions and complexes, which have been built here in the last few years, contribute to the development of gymnastics. The Azerbaijani gymnasts' performance at the First European Games was great and now they show themselves at the world championships and Olympic Games, some of them win medals. I think Azerbaijani gymnastics is on the right track," he noted.

According to the president of the technical committee of the European Union of Gymnastics, Azerbaijan has all chances to be at the top of this sport in the future. "I am confident that in the future Azerbaijan will be one of the strongest powers in gymnastics due to such sport infrastructure, especially the training center, and considering the popularity of gymnastics," Yakov Vishnev believes. He also admitted that, in his opinion, Azerbaijan is a wonderful country.

Administrative Director of the European Gymnastics Union, Kirsi Erofejeff-Engman, noted that Azerbaijan's organization of competitions has increased dramatically over the years. "It seems that this is my ninth visit to Azerbaijan, and I see huge development is comparison to the first visit. New training centers were built, there are many competitions at national and international levels, of course, the most important among them were the First European games last year. A lot of participants from Azerbaijan are involved in the European championships now, so the development of gymnastics is amazing in the country," she said.

Kirsi Erofejeff-Engman agreed that Azerbaijan has great prospects in gymnastics. There are great coaches and a very strong support from both the government and the people of the republic. Therefore I do not see any obstacles for this development to continue. I think the republic's level in gymnastics will be very high," the administrative director of the European Federation of Gymnastics expects.

Chairman of the Trampoline Technical Committee of the European Gymnastics Union, Vladimir Zengman, noted that the development of this type of gymnastics in Azerbaijan is keeping pace with the world. "For several years we have seen the development of Azerbaijani trampoline gymnasts and I am very happy that their level is getting higher and higher. I would like to wish all the Azerbaijani trampoline gymnasts success in the next Olympic cycle. Also, I am glad that we will meet again in Baku in 2018 at the 26th European Championships in trampoline," he said.

Zengman recalled that the new Olympic trampoline cycle will be started by the World Cup in Baku, and this tournament will be the first competition between trampoline gymnasts under the new rules. "From the January 1st they will start assessing landings on trampoline. I am confident that the competitions will be successful, because Azerbaijan's performances at the First European Games and the World Cup this year were great," the chairman of the Trampoline Technical Committee of the European Gymnastics Union stressed.