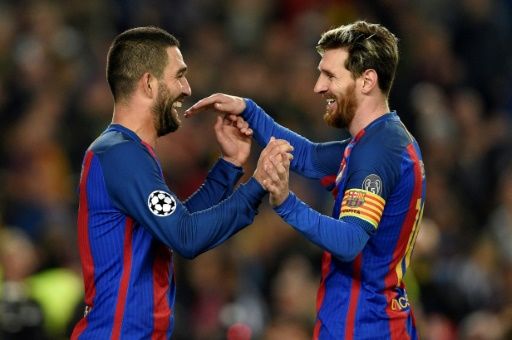 Barca were already guaranteed top spot in the pool ahead of Manchester City before kick-off, with Gladbach similarly secure in the Europa League qualification place at the expense of Celtic.

Messi only managed to score one in a first half that saw most of Barca's chances fall his way, with Arda then at the double with a pair of quick-fire strikes after the interval before he secured himself the match ball midway through the second half by striking his third.

Arda had earlier set up Messi's goal in a redemptive outing for the winger, who had not started in this season's Champions League before Wednesday's tie.

Having little to lose did not prompt a cavalier approach from Gladbach, who operated with a six-man defence when Barcelona had the ball - which accounted for the majority of the match.

Arda played a pass behind the advancing Messi with Barca's first clear chance, but the Turkey international got things right when presented with another opportunity two minutes later.

Messi pounced on a loose ball to race through the centre before playing in Arda on the left and then darting into the box to sweep home the subsequent cut-back.

Yann Sommer had to parry Messi's fierce drive over the crossbar two minutes later as the Barcelona number 10 - playing in a withdrawn role behind Paco Alcacer - inspired some of the Catalans’ lesser lights.

Barca probed and prodded Gladbach, who offered little in return, and Messi was denied his landmark goal by Tobias Strobl's last-ditch tackle two minutes from the break after fleet-footed work from Aleix Vidal and Denis Suarez on the right.

That same wide-right pairing combined again five minutes after half-time, as Suarez provided Arda with a simple header and he latched onto a pass from Vidal to clip the ball home and put Barca in sight of another big home win, following 7-0 and 4-0 victories over Celtic and City already this term.

Alcacer did not take his chance to prove his first-team worth, blasting a one-on-one chance straight at Sommer, but the former Valencia striker did make Arda's hat-trick finish a simple one, playing a ball across the six-yard box that the winger netted.

Sommer produced a stunning one-handed save to deny Messi's chance to claim his place in the record books with a diving header, before Arda was afforded a richly deserved ovation when he was replaced by Champions League debutant Marc Cardona.

The celebratory mood gave way to a meandering finale, but a first win in four games - and such a dominant one - will put a spring back in Barca's step as they hunt down Madrid in LaLiga.