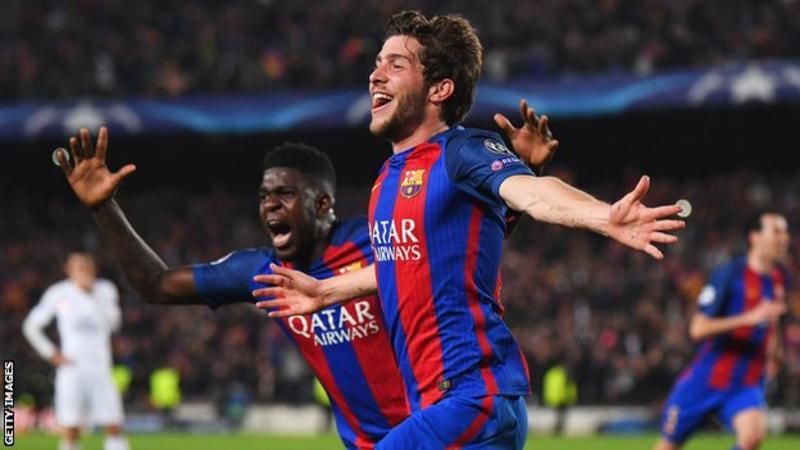 Barcelona made Champions League history by becoming the first team to overturn a first-leg 4-0 deficit and knock out Paris St-Germain to reach the quarter-finals for the 10th successive season.

Axar.az reports that, the Spanish champions were 5-3 down on aggregate in the 88th minute, but Neymar's free-kick and penalty followed by Sergi Roberto's 95th-minute winner sealed victory. Barcelona had led 2-0 at the break courtesy of Luis Suarez's header after just three minutes and Layvin Kurzawa's own goal.

Neymar then fell over Thomas Meunier in the box and Lionel Messi converted the penalty just four minutes into the second half. Edinson Cavani lashed home for PSG on 61 minutes as the tie looked to be over for Barcelona, but they obviously had not read the script.

Neymar curled a sumptuous free-kick into the top corner before Suarez won a penalty and gave it to the Brazilian to convert. Substitute Roberto then netted his first goal of the season in one of the greatest Champions League ties of all time.

A hat-trick from the striker and a goal and an assist from the teenager sent the German side into the Champions League quarter-finals.

Pierre-Emerick Aubameyang put his first-leg horror show behind him, netting a hat-trick as Borussia Dortmund secured a 4-0 win over Benfica to progress to the quarter-finals of the Champions League.

The Gabon international missed a penalty and two more gilt-edged chances as Thomas Tuchel's side lost 1-0 in Portugal three weeks prior, but they made light work of Wednesday's return back on home turf.

Visiting coach Rui Vitoria had expected an onslaught and that was exactly what Dortmund provided, despite the absence of Marco Reus through injury, as Aubameyang nodded an early opener.

While Benfica stood firm for the remainder of the first half, Christian Pulisic, having assisted the first goal, doubled Dortmund's lead to take control of the tie with just over half an hour remaining.

And Aubameyang, who had never previously scored in the tournament's knockout stages, added his second of the game just two minutes later, before completing his treble five minutes from the end.

Dortmund can now look ahead to the last eight of the competition and the writing was seemingly on the wall after it took Aubameyang just four minutes to banish memories of a nightmare first leg and draw Dortmund level.

Ousmane Dembele delivered a corner from the right for Pulisic to flick a header towards the far post, where Aubameyang was left unmarked to nod into the net.

The hosts were clearly in the mood as Dembele bent a shot wide from an Aubameyang-powered counter-attack, but Benfica responded with Franco Cervi striking low into the arms of Roman Burki.

Luisao then nodded straight at the Dortmund goalkeeper, before Pulisic tested Ederson with a header of his own at the other end.

Cervi had another opportunity to score shortly after half-time, but Lukasz Piszczek recovered to make a magnificent block after slicing a clearance straight to the visiting winger.

Dortmund's best moments, meanwhile, were coming from set-pieces, with Aubameyang twice meeting Gonzalo Castro free-kicks to volley wide and then, from an offside position, straight at the sprawling Ederson.

Those efforts started to pile the pressure on the away defence, though, and their resistance was soon broken.

Ederson blocked brilliantly from Aubameyang, but, with Benfica unable to fully get the ball clear, an excellent Piszczek pass into the box found Pulisic, who lifted a phenomenal finish over the advancing keeper for his first Champions League goal.

And, with Vitoria's men still rocking, Aubameyang then steered Marcel Schmelzer's cross past the helpless Ederson from the next attack.