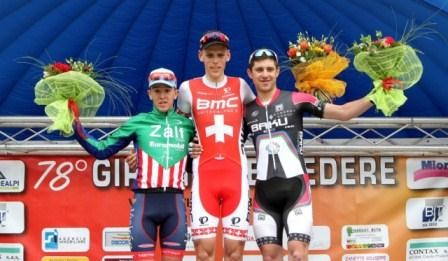 Josip Rumac finished third in the Giro del Belvedere U-23 race. The young Croatian, riding for Synergy Baku Cycling Project, had been in the break group all day and still had enough left to sprint on to the podium.

Rumac, 21, last rode the Settimana Internazionale Coppi e Bartali, which ended Sunday. He brought his good form into this race, which featured numerous climbs along the 166 km course.

The break group of the day, including Rumac, got away at the start of third of 11 laps of an opening 12km circuit. By the time they moved on to the closing circuit, the group had dropped to five riders. Three stayed together, and they were joined by 10 others near the finish. It was this 13-rider group which sprinted for the win.