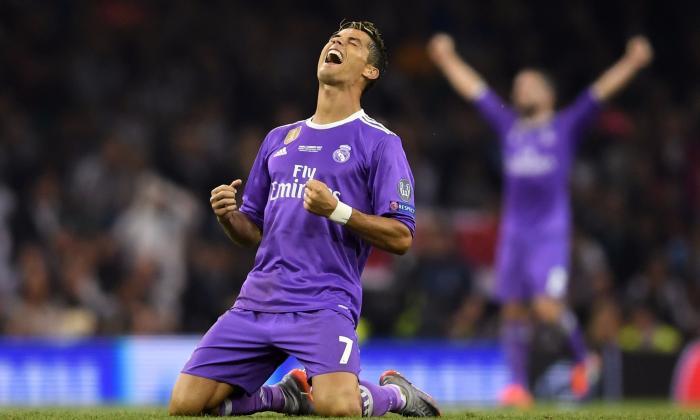 Real's record 12th triumph in this competition - and third in four seasons - was predictably orchestrated by Ronaldo, who has now scored in three different Champions League finals.

Ronaldo stopped a bright opening by Juve in its tracks as he swept in Dani Carvajal's pass after 20 minutes, before Mario Mandzukic levelled with one of the great Champions League final goals, firing a sublime overhead kick beyond Real goalkeeper Keylor Navas.

Real were unstoppable after the break, restoring their lead just through Casemiro's deflected shot before Ronaldo scored at the near post from a cross by the outstanding Luka Modric.

Juventus's misery increased when substitute Juan Cuadrado was sent off for a second caution after a clash with Sergio Ramos, before substitute Marco Asensio emphasised Real's superiority with a precise finish in the last minute.

Ronaldo cut a frustrated figure early in the match, gesturing to German referee Felix Brych about what he perceived as some rough treatment.

But he ended the night as Real's hero, winning his third Champions League winners' medal for the Spanish club and fourth in total, as the 32-year-old continues to write new chapters in his glittering career.

On display in Cardiff were all the facets that make him an all-time great forward - pace, desire, anticipation, technique - as he helped Real dismantle a Juve defence that conceded just three goals in 1,080 minutes en route to the final.

Ronaldo's first was an instant sweeping finish beyond the outstretched right arm of Gianluigi Buffon while the second showed the touch of a poacher, moving like lightning beyond static Juve defenders to guide in an emphatic near-post finish.

The Portugal captain now has a remarkable record of 105 goals in 140 Champions League games - 12 of those coming in just 13 games this season.

He did so again here in Cardiff.