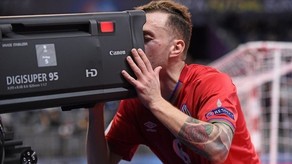 Futsal national Azerbaijan team’s come out the next match at the European Championships in Belgrade, Serbia.

The match was intense and dramatic. Thanks to blow in the last minute the team of Azerbaijan ended with a victory - 6:5. However, Faustino Perez’s team provided ticket to the 1/4 finals.