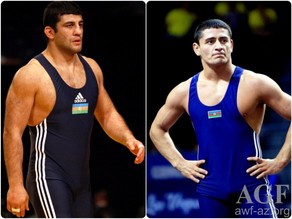 The representatives of Azerbaijan - "Baku-2015" First European Games winner and World Champion Rasul Chunayev and wrestler Shalva Gadabadze. R.Chunayev in 66 kg weight category will face with Croatian Dominique Etlinger at 1/16 finals. Sh.Gadabadze in 98 kg weight category will meet with Austrian Daniel Gastl at 1/8 finals. In order to qualify for the Olympics they need to reach the final.