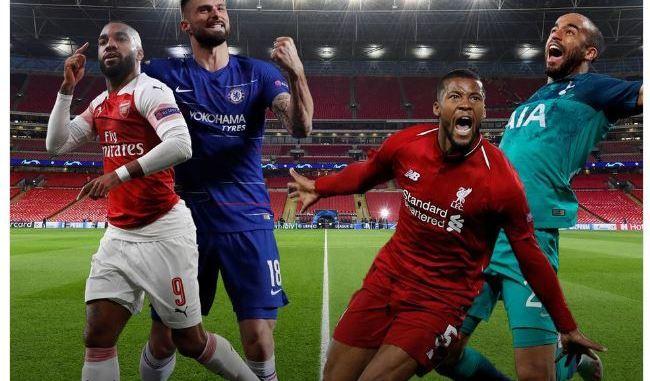 Arsenal will face Chelsea in another all-English final after both London clubs made it through to the Europa League final on Thursday.

A day after Tottenham set up an all-English Champions League final against Liverpool, Arsenal overcame Valencia in Spain, while Chelsea held its nerve to defeat Eintracht Frankfurt 4-3 on penalties.

It is the first time one country has provided all four finalists for both the Champions League and Europa League.

While Arsenal's route to the final was rather more sedate, Chelsea's was anything but after it was taken all the way to penalties by an exciting and adventurous Eintracht Frankfurt.

With the tie level at 1-1 after the first leg, it was Chelsea that struck first at Stamford Bridge through Ruben Loftus-Cheek after 28 minutes.

The visiting side hit back four minutes after the interval through Luka Jovic, one of the most sought after strikers in Europe, with the forward racing through to slot the ball past the stranded Kepa Arrizabalaga in the Chelsea goal.

Both teams had chances to win the tie in the additional 30 minutes of extra time but David Luiz's spectacular block on the line denied Sebastien Haller, while Chelsea captain Cesar Azpilicueta's effort was ruled out for a foul on the Eintracht Frankfurt goalkeeper.

With the scores level at 1-1 on the night and 2-2 on aggregate, it was left to penalties to separate the side with Kepa the hero for Chelsea.

The Spaniard saved two spot kicks, allowing Eden Hazard to fire home the winner and send Chelsea into the final.