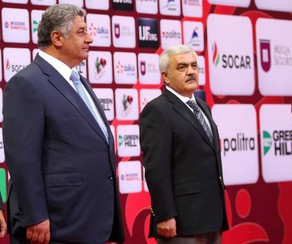 AFFA President Rovnag Abdullayev and Minister of Youth and Sports Azad Rahimov have met with Azerbaijan U-17 team.

According to the AFFA's official website, the meeting was held in Baku after the game with Scotland in the group stage of the European Championship.

R. Abdullayev and A.Rahimov congratulated players on victory and thanked to the national team for finding strength to continue and cope with psychological difficulties after the defeat in the first game in the big score and gaining a victory and a draw in next matches. They wished players good luck in future tournaments.

Notably, Azerbaijani team has gained 4 points from 3 games and ranked 3rd in Group A.