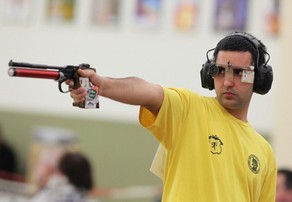 Azerbaijani shooter Ruslan Lunyov has won a license for Rio 2016 Summer Olympics, Report was told by head coach of the team Irada Ashumova.

According to him, the 27-year-old athlete has been presented 'wild card' to participate in the Olympics. I.Ashumova said that elections were made among 3 Azerbaijani shooters. The head coach said that International Shooting Sport Federation preferred R.Lunyov, as he had a higher rating.

Notably, Ruslan Lunyovis a 48th athlete to participate in Rio-2016.