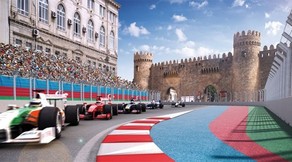 The Baku City Circuit is a planned motor racing circuit in Baku, Azerbaijan to be constructed near Baku Boulevard that scheduled to host the Baku European Grand Prix and its support events from 2016.

Formula 1 season is set to be one of the most fascinating in years. Indeed, the 2016 FIA Formula One World Championship will feature a record 21 races between March and November.

The specially constructed Baku City Circuit, the newest addition to the Formula 1 calendar, will see Formula 1 cars race around the picturesque streets of downtown Baku for the first time on the weekend of 17-19 June.

The six kilometre, counter-clockwise layout of the circuit was designed by circuit architect Hermann Tilke. The circuit is planned to start adjacent to Azadliq Square, then loop around Government House before heading west to Maiden Tower. Here, the track is planned to have a narrow uphill traversal and then circle the Old City before opening up onto a 2.2 km (1.4 miles) stretch along Neftchilar Avenue back to the start line. The circuit is projected to be the fastest street circuit in the world and the second longest circuit on the current F1 calendar behind the Circuit de Spa-Francorchamps in Belgium which currently is the longest circuit on calendar.

It is expected that lap times in the 1 minute 40 seconds will be achieved during the Formula One event.

The Baku Marshals Club of the 2016 Formula 1 Grand Prix of Europe has also been launched.

1200 marshals have been involved in the European Grand Prix.

The race may be entered in the world history as the fastest grand prix.