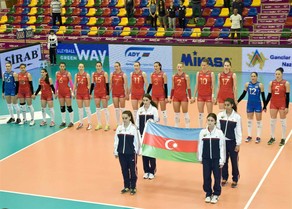 The venue and time of the upcoming finals of the Europa League between the women's volleyball teams of Azerbaijan and Slovakia was announced.

The first match will be held on June 30 at 20:00 on Baku time at the Sports Palace, Nitra.

Meetings will be managed by Mirko Jankovic (Serbia) and Eva Tibor (Hungary).

The return match will be held on July 3 in Baku Sports Palace. The game, which will be managed by Gnanu Giorgio (Italy) and Helena Geldof (the Netherlands), will begin at 18:00 Baku time.

Notably, in the semi-finals, Azerbaijani team beat Greece and Slovakia has defeated Slovenia.