We should definitely win match with San Marino 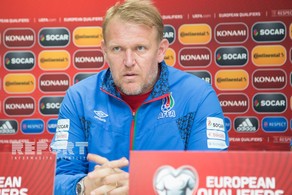 I've watched matches of both Ramil Sheydayev and Emin Mahmudov. I think that both footballers will benefit the national team'

The Croatian coach also commented on prospects of Sheydayev and Mahmudov to play at the national team: 'Their future careers depend on themselves. I hope that they will get the best results by playing in the first team of new clubs. We will keep them in the spotlight, assistants will watch matches live, if necessary'.

The 47-year-old expert said that the two players will be invited to the national team training camp to start on August 24: 'Playing of these footballers for the national team may have a positive impact on our plans regarding Euro 2020. Both of them are young and can play for the team for many years. However, we will continue search for young footballers. We shouldn't forget that we will play at World Cup 2018 qualifying round matches before Euro 2020. For now, all attention should be directed to the qualifying round. Our first away match will be against San Marino team. We should definitely win the match for successfull start at the group stage. Then we will receive Norwegian team. I hope that none of the footballers will suffer injury'.