“Organizers have done a great job” 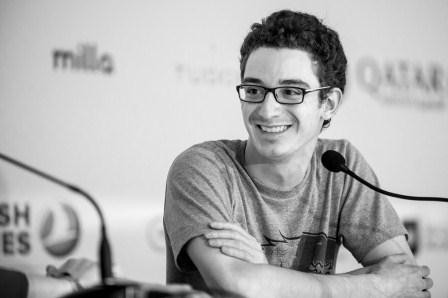 The USA has defeated the yet unbeaten Ukrainian side with a score 2.5:1.5 in the sixth round of the 42nd Chess Olympiad in Baku. The only victory was brought to the US team by its leader Fabiano Caruana.

In a press conference after the game, 24-year-old Caruana said, “So far the tournament has been going quite well for us. We have not lost in six rounds and are ahead of Russia and China in overall standings. This is a good result so far. This US team is very young. The match against Ukraine was rather difficult, but I managed to secure a victory,” Caruana said.

Fabiano Caruana noted that the rest day worked very well for him. “I tried not to think about chess yesterday. I wanted to relax my brain a little. This helped me save some energy for the match against Ukraine. I am glad that we got the upper hand over a strong opponent,” he added.

The US grandmaster also praised the level of organization of the Baku Olympiad. “The competition is very well organized. It is impossible not to see that. It is only up to the players to concentrate on chess and delight their fans,” he said.