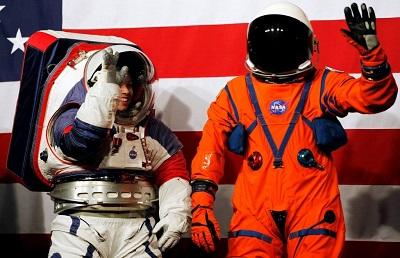 The US space agency has unveiled the prototype for a new spacesuit that could be worn by the next astronauts on the Moon.

The xEMU prototype suit looks similar to ones used at the International Space Station.

But Nasa said it had been improved for comfort, fit and mobility on the Moon.

Mr Bridenstine also presented the Orion Crew Survival System, an orange flight suit with helmet that will be worn by crews in the Orion spacecraft for launch and re-entry.

Orion is the replacement for the space shuttle, but, unlike that system, it's designed to carry astronauts to the Moon and other targets in deep space.

The new Moon suit, which is known formally as the Exploration Extravehicular Mobility Unit (xEMU), is designed to give the wearer a customised fit whatever their size.

The suit has a 100% oxygen environment and should help astronauts get to work right away rather than having to spend time "pre-breathing" to purge nitrogen from their bodies.

The suit's life support system should give the astronaut around eight hours' worth of air, with an extra hour for contingency.