600 guests attend a costume party at the Palace of Versailles 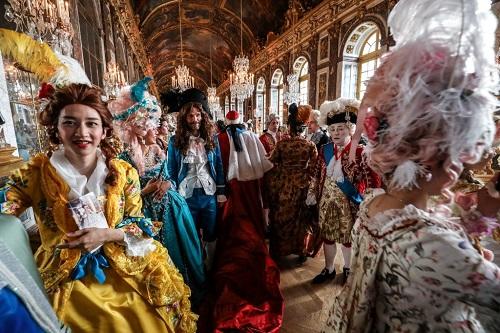 A costume party at the Palace of Versailles gave 630 guests the chance to realise their 18th-century dreams on Monday night.

The annual event attracts lovers of fashion and history alike from across the globe.

"We really feel like we're living in the time, in the 18th century, and people look so nice. It's really great to see people dressed in fine costumes. Everyone's playing a character, and I really like it" said 45-year old Isabelle Lapeyre.

This year's theme "Marie-Antoinette and fashion" gave guests the opportunity to indulge in the decadence of the controversial queen's lifestyle. Visits to the private chambers of Louis XIV and Marie-Antoinette were organized, along with a trip to the apartments of Madame Pompadour, Louis's mistress.

A 37-year old hairdresser from Texas who has always admired French fashion had wanted to attend the party for a long time.

"It's a dream. Where we're from, we're from Houston, Texas - we don't have a lot of events that cater to this style of clothing, so this was always a dream for us to come here, and we finally made it happen" he said.

Guests paid between €150-€510 for the event. Activities included Baroque dance lessons and guided visits with the highest paying attendees being treated to a private concert in the queen's room.

The finale of the evening featured a grand closing ball, followed by a fireworks display over the palace gardens.

The Palace of Versailles is one of France's most notable historic sites. Viewed by the French as both a hallmark of their culture and a symbol of the flagrant injustice of the monarchy, the palace attracts more than 8 million visitors every year.