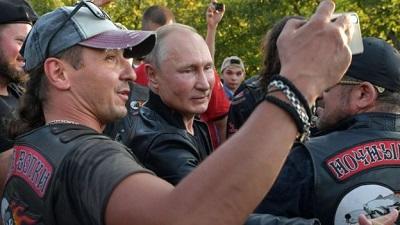 Ukraine has protested to Russia after a leather-clad President Vladimir Putin visited the annexed Crimean peninsula to attend a bikers' festival.

Its foreign ministry described Saturday's visit as a "blatant violation of Ukraine's sovereignty".

Ukraine said attempts by Moscow and its media to present such visits as routine were "pathetic".

Crimea was annexed from the Ukraine in 2014, triggering a wave of ultra-patriotism in Russia.

The Night Wolves, a right-wing nationalist bikers' group close to President Putin, were prominent supporters of the annexation.

This year, they held their annual show in Sevastopol, the peninsula's largest city.

Mr Putin - who arrived at the event astride a motorbike - appeared to be the guest of honour, with bikers thronging around the Russian leader, hoping to get a selfie.

But the visit comes as Mr Putin faces growing disquiet at home.

This may prevent the coronavirus - Russian Minister