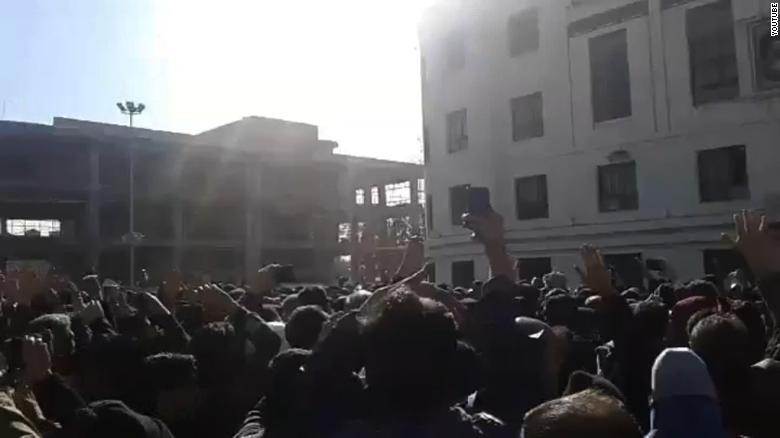 Thousands of Ahvaz Arabs took to the streets of southwest Iran on Monday to protest the suspicious death of activist and poet Hassan Heydari.

Axar.az reports citing Aawsat that he reportedly died of a seizure. He had routinely been detained by security forces.

He was detained in March as part of a campaign against Arab activists, who had formed volunteer teams to tackle widespread flooding that had struck their regions.

Heydari was released a month after his arrest but was summoned several times for questioning by intelligence.

His relatives have questioned the cause of his death.

He had been transferred to the hospital after the deterioration of his health.

Witnesses said the intelligence forces had forced the family to bury him on Monday morning hours before the news of his death broke out.

Security forces have since blocked several roads in Ahvaz.

Other videos showed them firing tear gas at the protesters.

In other footage, youths are seen tearing Iranian flags.

Reza Najafi, the head of security affairs at the Khuzestan governorate, said on November 11 that Heydari had died from a stroke or a heart attack and that the alleged protests were, in fact, memorial gatherings by his friends and supporters, reported the Fars news agency.

Turkey: Schools to reopen at August-end

Zelensky's wife recovered from the coronavirus

Pedestrians were banned from smartphones

Such permission will be obtained for an individual car

Ex-Galatasaray forward Baros to retire at end of season

Will there be taxi service on weekends? - Official

Russia: Solution of the Libyan conflict is not military

Kremlin`s counter-attack: A coup is prepared in Yerevan

Tough message to Israel: There will be great casualties

The new PM of France has been announced