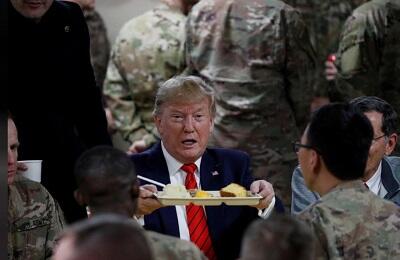 President Donald Trump has paid a surprise Thanksgiving visit to Afghanistan, where he announced the US and Taliban have been engaged in ongoing peace talks.

Axar.az reports citing PBS that on a surprise visit to Afghanistan, President Donald Trump thanked U.S. and Afghan troops for the work they are doing, saying the reason the Taliban is seeking a peace deal is that the militaries are “doing a great job.”

“There’s nowhere I’d rather celebrate this Thanksgiving than right here with the toughest, strongest, best and bravest warriors on the face of the earth,” Trump said, standing in front of U.S. Army soldiers and Afghan President Ashraf Ghani at Bagram Airfield.

During his speech, Trump touted an increase in defense spending, the U.S. economy and the killing of ISIS leader Abu Bakr al-Baghdadi.