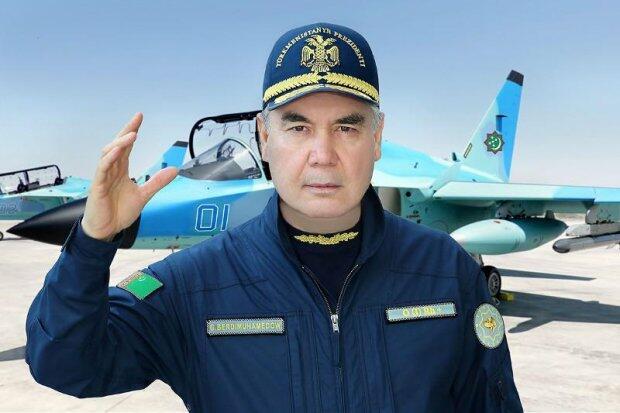 Today President Gurbanguly Berdimuhamedov who has been to this region on a working trip, having made after morning exercises pedestrian walk and bicycle ride, has familiarised himself with new modern military planes arrived at the order of the Armed Forces, their characteristics and tested one of them.

Axar.az reports citing foreign media that attaching a great value to the healthy way of life, the leader of the nation, first of all, took a morning walk.

After the walk, the leader of the nation took a bicycle ride. Last year the number of fans of cycling as a non-polluting type of transport has increased. The given sport is especially popular among the youth and it testifies to the big support of the population of the country to the noble example of the head of the state.

Then, President Gurbanguly Berdimuhamedov arrived in the parking lot of the new military planes which have arrived to the order of the Armed Forces of Turkmenistan.

Deputy Chairman of the Cabinet, Secretary of the State Security Council Ch. Amanov reported the Supreme Commander-in-Chief of the Armed Forces of the country on the arrived modern technics.

Having accepted the official report, the head of the state was familiarised with military aircraft and its features. The President of Turkmenistan was reported on the equipment of new warplanes, their target mission.

The head of Turkmenistan saw drawings with technical characteristics of military planes and other combat material, breadboard models and corresponding illustrations. As was noted, great value is given to the modernisation of the material base of all structures of the Armed Forces. In the Military doctrine of Turkmenistan, which has an exclusively defensive character and completely answers principles of neutrality, the primary goal defines maintenance of peace and tranquillity of the country happy and safe life of its people.

With a view of the development of co-ordinated actions of all combat arms military-tactical doctrines which are directed to increase of the level of professionalism of military men, power and defensive potential of the National army are regularly held.

Then the Supreme Commander-in-Chief of the Armed Forces of the country, having dressed a special suit, in full equipment of the military pilot took a place behind a steering wheel of the new military plane to test it. Before setting the engine in motion, the head of the state carefully made the preliminary actions accepted in such cases.

In some minutes, having roared jet engines, the fighting vehicle soars up in the sky. In few seconds the plane operated by the head of the state gained the necessary height at which he made some turns.

Arrived to the order of the Armed Forces the new military plane is capable to change instantly its course, to make demonstrative reconnaissance flights.

This fighting vehicle equipped with all necessary for the performance of tasks facing military-air forces is intended for the protection of air space, conducting reconnaissance, support of actions of land forces.

The plane operated by President Gurbanguly Berdimuhamedov is capable to loose height smoothly and promptly to gain the necessary height.

This fighting vehicle equipped with modern turbojets is necessary for the training of military pilots, its range of flight with a maximum height of 13 thousand 700 metres makes 2 thousand kilometres.

Making flight by the supersonic plane, the head of the state made some turns.

Having finished the test flight by the new plane, the head of the state made a smooth landing.

All it testifies that our sky is reliably protected that the country’s people can live in peace, surrounded with the care of President Gurbanguly Berdimuhamedov.

Deputy Chairman, Secretary of the State Security Council Ch.Amanov and Minister of Defence B.Gundogdyev congratulated the Supreme Commander-in-Chief of the Armed Forces of the country on his successful test flight.

Minister of Defence addressed with request to allow the flight uniform of the President of Turkmenistan to hand to the museum of the military school named after Berdimuhamet Annaev which building is under construction in the capital.

The Supreme Commander-in-Chief of the Armed Forces of the country, having approved this proposal, underlined that it will be expedient to hand the outfit of the military pilot to the museum of a new building of the specialised military school named after Berdimuhamet Annaev.

The leader of the nation pointed out that it will be of great importance in education of future military men and promotion of purposefulness, patriotism, love to Fatherland and its people, solicitous attitude to traditions of ancestors.

Having wished the present successes in their service, the leader of the nation left the place of the event.

Then, having finished his working trip to Balkan region, the head of the state from the International city airport of Turkmenbashi took off for the capital.