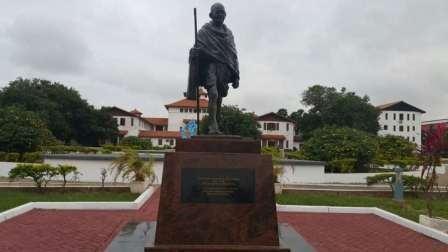 Critics accuse him of advocating for the superiority of Indians over Africans.

Academics and students at the University of Ghana are calling for the removal of a statue of Mahatma Gandhi from their campus citing his allegedly racist attitudes toward black people during his time in South Africa.

An online petition — which began circulating two weeks ago and has gained more than 1,300 supporters — lists Gandhi’s use of the pejorative term kaffir, as well as letters written by the Indian independence leader during his time in South Africa as indicative of his “racist identity.”

The petition quotes Gandhi’s open letter to the Natal parliament in 1893 as evidence of his racist beliefs. In it, he wrote: “A general belief seems to prevail in the Colony that the Indians are little better, if at all, than savages or the Natives of Africa. Even the children are taught to believe in that manner, with the result that the Indian is being dragged down to the position of a raw Kaffir.”
The statue was gifted to the university by the Indian embassy in June during a visit to the county by India’s President Pranab Mukherjee. Petitioners say academic staff were not consulted before the figure was erected on campus.

“It is better to stand up for our dignity than to kowtow to the wishes of a burgeoning Eurasian super-power,” they wrote.

“We ask why should we be critical of others to establish our own stature. There can be no justification for that,” said Ela Gandhi, the independence leader’s granddaughter and former MP for the African National Congress in South Africa, to al-Jazeera. “By all means remove it,” she continued while urging students not to discard the “notion of nonviolence, of compassion … [and] Ubuntu” that her grandfather stood for.

Critics have also cited the lack of statues of African heroes and heroines on campus as a further reason to remove the statue of Gandhi, and point to movements in universities such as Yale and Oxford to remove “racist symbols.”

Last year, a protester in Johannesburg vandalized a Gandhi statue after similar demonstrations against his racist attitudes. In August, protests in Davis, Calif., halted the installation of a Gandhi statue in the city’s central park.

Criticism of Gandhi’s discriminatory attitudes is not new.

In 2014 novelist and essayist Arundhati Roy accused Gandhi of accepting the caste system, what she called “the most brutal social hierarchy ever known.”

However, despite Gandhi’s initial views, some argue that he began to engage with the black freedom movement toward the end of his tenure in South Africa.

In his book Great Soul: Mahatma Gandhi and His Struggle With India, journalist Joseph Lelyveld cites Gandhi’s response to a 1913 law that made it illegal for black South Africans to own 92% percent of the country’s land.

“Every other question, not excluding the Indian question pales into insignificance before the great Native question,” wrote Gandhi in the Indian Opinion. “This land is theirs by birth and this Act of confiscation … is likely to give rise to serious consequences unless the Government takes care.”