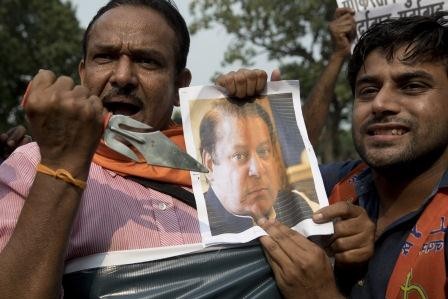 The top Pakistani official in the volatile dispute over Kashmir warned in an interview that India is dangerously escalating a war of words over the divided territory between the two nuclear-armed powers, vehemently denying that Islamabad was behind a recent attack that killed 18 soldiers at an Indian military base there.

Indian rhetorical attacks are “creating war psychosis” that could spill out of control, said Sardar Masood Khan, the Islamabad-appointed president of Azad Jammu and Kashmir.

“It threatens to plunge South Asia into a self-destructive war,” Mr. Khan told The Washington Times in an interview Monday as concerns mounted anew that months of devolving tensions over Kashmir could result in a full-blown military clash between India and Pakistan.

Although the long-running clash often is overlooked in the West, security analysts say it remains one of the globe’s security trigger points and a continual stumbling block to the Obama administration’s diplomatic and defense ambitions in the region.

Indian officials have spent much of the past week alleging that Islamabad-backed terrorists carried out the Sept. 18 strike on an Indian army base near the highly militarized line that divides Kashmir between the two nations, which have a history of waging intermittent but bloody wars over the territory since partitioning into separate nations in 1947.

While tensions had run high in recent years, they soared this summer amid a wave of protests by predominantly Muslim citizens living in the Indian-controlled side of the territory and a subsequent crackdown by Indian army troops. The situation escalated again with last week’s attack — the deadliest in roughly two decades on Indian forces in Kashmir.