Calais camp will be completely dismantled 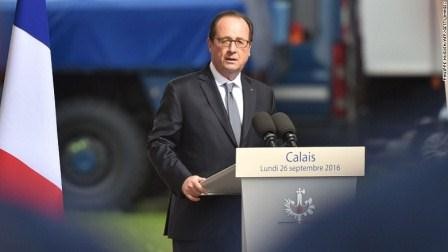 French President Francois Hollande says the controversial makeshift migrant camp known as "The Jungle" in Calais will be completely dismantled before the end of the year.

During a visit to the northern city on Monday, Hollande said France will carry out a "full and final" dismantlement of the camp, where thousands of displaced people live in squalid conditions.

"From now on our objectives are clear -- to guarantee the security of the people of Calais, maintain public order and ensure for the migrants and refugees conditions are dignified," Hollande said.

He said he was in Calais to tell the "desperate immigrants" that they will not remain in the camp because "their place is not here" but they would "protect them as much as necessary."

Hollande said there are at least 7,000 migrants living in the area, according to the latest figures, which were released in August. According to the Calais spokesperson from the Ministry of the Interior, there were 900 unaccompanied minors living in the camp when aid organization France Terre d'Asile (FTDA) last counted.

Some unaccompanied minors will be "taken in by specific accommodation dedicated to their situation, others which fulfill the preconditions will be joining Britain," the French Ministry of the Interior said.

Laura Griffiths, Senior Field Manager for Safe Passage UK, said it's a disgrace that children who have a legal right to live in the UK are still living in tents.

"They have been through unimaginable hardship on their lone journeys through Europe, and now face losing their makeshift homes as the French authorities threaten to bulldoze the camp," Griffiths said. "The British and French governments must act to end the suffering of these children."

The French President said that the migrants would not be allowed to return to Calais to resettle again, and that security measures would be enforced to ensure there are "no more re-establishments."

However Clare Moseley, founder of the charity Care4Calais, told CNN that despite France's efforts in the past to destroy the camp, refugees continue to come back to Calais.

"In February this year, over 50% of the camp was demolished and yet six months later the camp is bigger than it has ever been before," she said. "This is clear evidence that demolitions do not act as a deterrent and that refugees will not stop coming to Calais."

She says dismantling the camp will "achieve nothing more than making living conditions so much more inhumane."

Moseley instead suggests alternative, long-term sustainable solutions because "the refugee crisis will get worse before it gets better."

"We're not saying a refugee camp is a long term solution to the migrant crisis, but we can't destroy it until we do have a long-term solution," she said.

Millennial to Octogenarian: Three generations of refugees on today's crisis

French authorities have said they are creating up to 12,000 places in small centers across the country to cater to those removed from Calais. The capacity of each center will vary from 100 to 300 people.

Moseley said while the centers provide viable, alternative living arrangements to those wishing to claim asylum in France, "many refugees in Calais have strong reasons for wanting to get to the UK and will simply return to Calais."

She also added that if migrants and refugees are scattered across France it'll make it difficult for aid workers to get to them.

"Nobody's made a plan. I think this is a very short term action, they want to be seen as though they're taking strong action," Moseley said.

The camp is notorious for being a major transit point for migrants, who often hop onto the back of UK-bound cargo trucks in the hope of entering the country. Many in "The Jungle" are reluctant to register as refugees in France because their preferred destination is Britain.

Hollande also called on France's neighbor to support the clearance plan. "I also wish to repeat my determination in seeing the British authorities show their participation in what France is doing," he said.
He said that despite the UK taking a "sovereign decision" to free itself "from its obligations with regards to France" he still believed that the country was bound by its commitments to its neighbors and the EU.

However, a Home Office representative from the UK said "the dismantling of the camp in Calais is a matter for the French Government" and that they remain committed to protecting their "shared border in Calais and are working closely with the French to do so."

The representative added, "We will continue to support the French Government as it provides alternative accommodation to migrants in the camps."

Hollande is not expected to visit the camp during his visit to Calais. Instead, he will meet with security forces, lawmakers and business representatives.

Earlier this month the UK announced it would build a "big new wall" in the French port city as a further attempt to prevent refugees and migrants from entering Britain, British Immigration Minister Robert Goodwill said.

Care4Calais' Moseley says the wall suggests that authorities do not think the demolition of "The Jungle" will be successful.

"It's almost an admission by the French authorities that it's not going to change anything and refugees will keep coming to Calais," she told.

The 13-foot-high wall was part of a £17 million ($23 million) deal struck between Britain and France earlier this year.

Goodwill said that despite the current security measures -- which also included a fence -- some people were still managing to get through to the UK.

"The security we're putting in at the ports is being stepped up with better equipment. We're going to start building this big new wall very soon as part of the £17 million package that we're doing with the French," he said.

The decision came with controversy as British truck drivers criticized it as a "poor use of taxpayers' money."