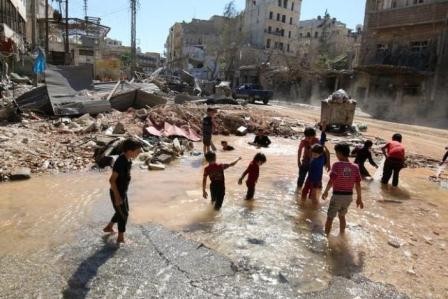 The United States broke off talks with Russia on Monday on implementing a ceasefire agreement in Syria and accused Moscow of not living up to its commitments under the Sept. 9 deal to halt fighting and ensure aid reached besieged communities.

The confirmation that the U.S.-Russian talks on Syria have collapsed suggests that there is little hope, if any, of a diplomatic solution emerging anytime soon to end a 5-1/2-year-old civil war that has killed hundreds of thousands of people and displaced 11 million.

"The United States is suspending its participation in bilateral channels with Russia that were established to sustain the cessation of hostilities," U.S. State Department spokesman John Kirby said in a statement.

Secretary of State John Kerry last spoke to his Russian counterpart, Sergei Lavrov, on Saturday, a senior State Department official said, after Kerry threatened last week to walk away from the talks.

In Moscow, Foreign Ministry spokeswoman Maria Zakharova told Russian news agencies the United States was trying to shift blame onto Russia, which in recent days had tried to sustain the agreement.

In the northeastern city of Hasaka, a bomb killed at least 20 people at a Kurdish wedding, according to a Kurdish militia and a monitoring group.

A U.S. intelligence official said the bombing campaign was "one of the deadliest" since the civil war erupted in 2011.

The end of the talks could trigger deeper U.S. consideration of military options such as providing more sophisticated arms, logistical support, and training to Syrian rebel groups, either directly or via Gulf Arab states or Turkey.

But the speed with which the ceasefire collapsed - after a U.N. aid convoy was bombed in Syria - appeared to take some officials in the Obama administration by surprise and without a clear plan on the immediate way forward.

U.S. President Barack Obama has been loath to get more deeply involved in a third war in the Islamic world and U.S. officials have said he is unlikely to do so with less than four months left in office.

Just before Monday's announcement, Russian President Vladimir Putin suspended a treaty with Washington on cleaning up weapons-grade plutonium, signaling he was willing to use nuclear disarmament as a new bargaining chip in disputes with the United States over Ukraine and Syria.

The senior State Department official dismissed links between the suspension of talks on Syria and Putin's announcement.

Amid the growing tensions, the State Department announced that the top U.S. diplomat on Europe, including Russia, will travel to Moscow later this week to hold talks with senior Russian officials on Russia's annexation of Ukraine's Crimea region in 2014. The United States and European Union imposed sanctions against Moscow for its actions in Crimea.

Kirby said the United States would continue to communicate with the Russian military to ensure that American and Russian aircraft targeting Islamic State positions in Syria do not come into conflict with each other.

But he said the United States would withdraw all personnel it had dispatched to prepare for military co-operation with Russia under the latest ceasefire agreement.

"Unfortunately, Russia failed to live up to its own commitments ...and was also either unwilling or unable to ensure Syrian regime adherence to the arrangements to which Moscow agreed," Kirby said.

U.N. envoy for Syria Staffan de Mistura said he "deeply regrets" the U.S. announcement but vowed "to push energetically for a political solution" to end the war.

Meanwhile, diplomats said the United Nations Security Council would begin to negotiate on Monday a draft resolution that urges Russia and the United States to ensure an immediate truce in Aleppo.

China's U.N. Ambassador Liu Jieyi said now was the time for more cooperation, but Britain's Ambassador to the U.N. Matthew Rycroft said he was not surprised by Washington's action.

"The situation has been allowed to degenerate into this awful, awful mess and we're trying to find a way out of it and trying to make sure the black flags are not going to fly over Damascus," he said, referring to Islamic State militants.