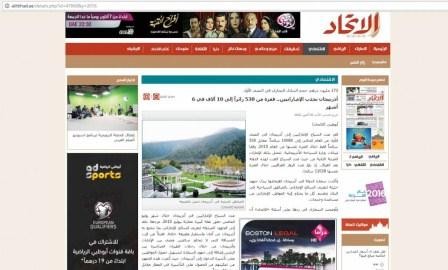 The UAE-based Al Ittihad newspaper has published an article headlined "Azerbaijan attracts citizens of the UAE…from 530 up to 10,000 tourists over six months".

The newspaper says the number of tourists from the UAE to Azerbaijan increased from 530 in the first six month of 2015 to 10,086 this year.

The article hails peace, stability, as well as the “fascinating” nature of Azerbaijan. Tidy streets of Baku, well-renowned hotels in the city, and similarities between the Azerbaijani and Arabian cuisines were also highlighted. The article hails the “marvelous nature, green woods”, natural lakes and waterfalls in Azerbaijan's Gabala and Guba regions, emphasizing the development of winter tourism in these areas. The article also hails bilateral relations between the two countries, saying that both countries try to further strengthen these ties through high-level visits. "The 6th meeting of the Joint Intergovernmental Commission is planned to be held in Abu Dhabi this November," the article says.

The newspaper also says that a number of Azerbaijani businessmen are engaged in investment and commercial activities in the UAE it also hails the UAE investment in Azerbaijan and the agreement on cooperation for the development of a free trade zone in Alat signed between Azerbaijan's Economy Ministry and Dubai's DP World company.