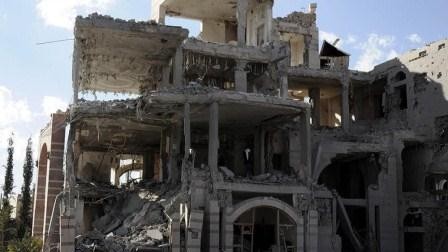 According to Al Mayadeen broadcaster, the death toll reached 213 people, while earlier reports suggested that some 82 were killed and 534 more sustained injuries.

The UN humanitarian coordinator in Yemen, Jamie McGoldrick, said aid workers were "shocked and outraged" by the attacks that hit a community hall where mourners had gathered.

The UN aid official called for an immediate investigation and said the international community must exert pressure to ensure civilians are protected. "This violence against civilians in Yemen must stop immediately," McGoldrick said in a statement.

The coalition, which has come under increasing international scrutiny over alleged civilian deaths, denied responsibility for the attack, saying in a statement that it had no operations at the location and "other causes" for the incident must be considered. It said the alliance "has in the past avoided such gatherings and they have never been a subject of targeting".

The dead and wounded included senior military and security officials from the ranks of the Shia Houthi rebels fighting against the internationally recognised government of President Abd Rabbuh Mansour Hadi, as well as their allies, loyalists of former president Ali Abdullah Saleh.