A article on Azerbaijan`s Independence Day 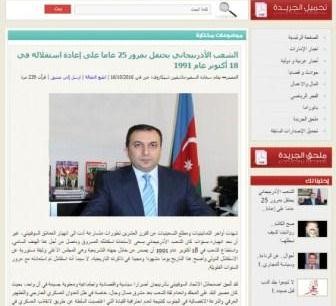 Azerbaijani ambassador to the United Arab Emirates Dashgin Shikarov has published an article headlined “The people of Azerbaijan celebrate the 25th anniversary of independence restored in 1991” in Abu Dhabi-based Al Fajr newspaper.

The article emphasizes that Azerbaijan adopted “The Constitutional Act on State Independence” on October 18, 1991 after the collapse of the USSR. “The first years of independence were characterized with foreign military aggression, ethnic cleansing and separatism movements inside the country, which challenged the existence of Azerbaijan as a country. The national revival commenced with the return of national leader Heydar Aliyev to power in Azerbaijan on June 15, 1993, strongly demanded by the nation.”

The ambassador highlights the “Contract of the Century” with foreign companies concluded back in 1994 for the joint oil production in Azerbaijan. The article says the contract paved the way for political, economic and social reforms in the country.

The article also emphasizes the meeting between national leader Heydar Aliyev and late President of the UAE Zayed bin Sultan Al Nahyan at the OIC Summit in Casablanca in 1994, which laid the foundation for ‘brotherly’ relations between the two countries.

The article also hails President Ilham Aliyev`s continuation of political course of national leader Heydar Aliyev since 2003. “Under the leadership of President Ilham Aliyev, Azerbaijan became the strongest economy in the region, cemented its international standing and improved the standard of living of its people.”

The ambassador underlines that “owing to wise and well thought-out policy of President Ilham Aliyev, Azerbaijan carries out large-scale international energy and transport projects. The country has made great strides in the spheres of culture, sport and arts.”

“Azerbaijan has built an image of a tolerant and multicultural country. In the last four years through support of first lady of Azerbaijan, President of the Heydar Aliyev Foundation Mehriban Aliyeva, the country has hosted high-profile international events like Eurovision song contest, first European Fames, Formula 1 race, and also plans to host the Islamic Solidarity Games in 2017,” the ambassador concludes.