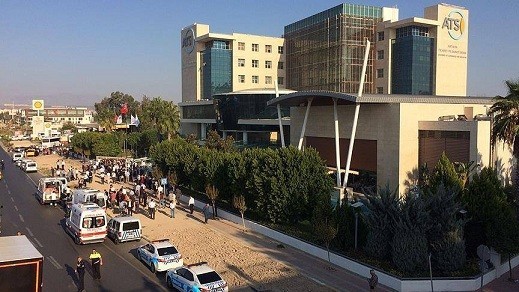 An explosion rocked the car park of a chamber of commerce building in the resort province of Antalya in southern Turkey on Tuesday, causing some casualties and ambulances were sent to the area.

It said the cause of the blast was not immediately known.

The Dogan news agency broadcast footage showing five ambulances in front of the building, where dozens of people looked on.

An eyewitness who was at the building told CNN Turk the blast smashed windows and left people bloodied and a Dogan reporter said one vehicle was blown apart.

Antalya is a major tourist resort on Turkey's Mediterranean coast. In August, two rockets hit a commercial facility near a resort town in the province, but caused no casualties.

It was not immediately clear who was responsible for that attack, but Kurdish and far-left militants have staged similar attacks, mostly against the security forces, in the past.

Turkey has been hit by a series of deadly bombings this year, some of which have been blamed on the outlawed Kurdistan Workers Party (PKK), and some on Islamic State militants.

In August a suicide bomber killed at least 50 people in an attack on a wedding party in the southeastern city of Gaziantep.